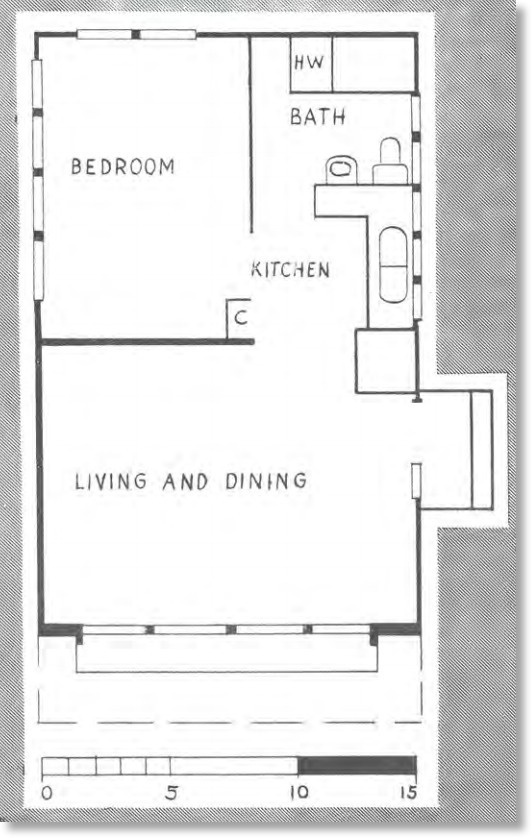 The A-6 house is part of the letter houses developed in the Tri-Cities. Spokane architect Albin Pherson was hired by the US Government to develop the housing to accommodate the large need for housing in the area. Mr. Pherson took on the challenge and in less than 90 days the community of Richland was planned on paper. As quickly as the planning endeavor happened, the paper to reality took even less time. On March, 20, 1943, construction of the streets began. One month later on April, 28th, the first house house (a B house) was completed.

Mr. Pherson opted to apply the ranch house design--pioneered by the great American architect, Frank Lloyd Wright--to promote clean, symmetrical lines and standardized design that was uncomplicated and efficient. The ranch-style homes first made their appearance in the 1920s and their easy yet sturdy construction appealed to developers and contractors alike. The ranch home quickly gained popularity, leading to a boom in the building of these homes from the 1940s through the 1970s. These designs in the Tri-Cities areas, as you'll see, still continue to be viable to today's real estate market because of their livability, flexibility in floor plans and uncomplicated designs.

Originally, the letter houses' interiors used sheetrock instead of the older lath and plaster method that was common until the late 1930's. The interiors of all the letter-houses had wood floors. The duplexes and the U and V houses (precuts) used softwood fir floors and the single-family homes used hardwood oak. The kitchens and bathrooms had real linoleum flooring (pressed cork processed with linseed oil). Interior decorative features include cornice details along with molding strips along the outside corners of walls. The interior doors on the older homes had two (or more) flat panels of solid wood surrounded by a border of thicker, molded solid wood (hollow core doors were a few decades away). Later doors typically had a single panel of wood inside of the thicker surround. Doorknobs were fairly close to today's standard but were slightly smaller. Brass was a common finish with plated chrome used inside of bathrooms.