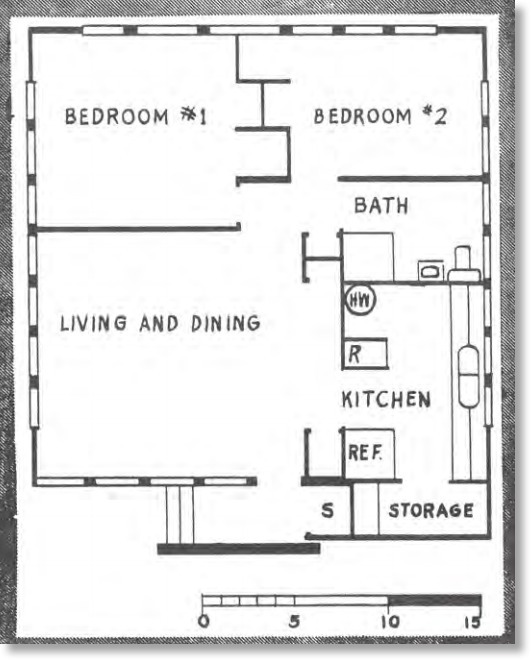 The B-1 house is part of the letter houses developed in the Tri-Cities. Spokane architect Albin Pherson was hired by the US Government to develop the housing to accommodate the large need for housing in the area. Mr. Pherson took on the challenge and in less than 90 days the community of Richland was planned on paper. As quickly as the planning endeavor happened, the paper to reality took even less time. On March, 20, 1943, construction of the streets began. One month later on April, 28th, the first house house (a B house) was completed.

Mr. Pherson opted to apply the ranch house design--pioneered by the great American architect, Frank Lloyd Wright--to promote clean, symmetrical lines and standardized design that was uncomplicated and efficient. The ranch-style homes first made their appearance in the 1920s and their easy yet sturdy construction appealed to developers and contractors alike. The ranch home quickly gained popularity, leading to a boom in the building of these homes from the 1940s through the 1970s. These designs in the Tri-Cities areas, as you'll see, still continue to be viable to today's real estate market because of their livability, flexibility in floor plans and uncomplicated designs.

This prefab is one of the designs that is the closest to a modern, sleek design that is quickly regaining popularity. If you're looking to buy a house and create your own retro paradise, one of these homes is right for you.