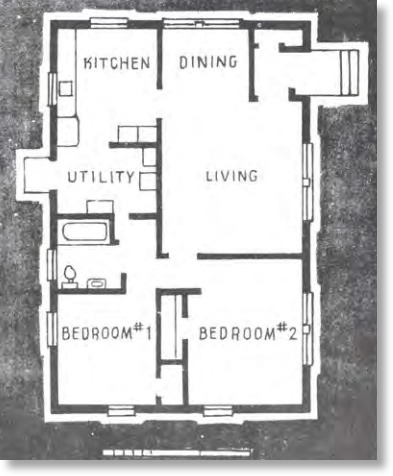 The U-house is one story tall--no basement. Interior floors are softwood fir with linoleum in the kitchen and bathroom. This is also known as a "precut" as all the lumber arrived "precut" on the building site. Unlike the picture on the house plan, very few, if any of the U houses had a gabled roof. Instead, they have hipped roofs (similar to the picture of the V house).

The Tri-Cities letter houses were designed by Albin Pherson, an architect from Spokane hired by the US Government. In less than 90 days, he planned the entire community of Richland. Construction of the streets began on March 20, 1943 with the first house being completed (a B-house) on April 28, 1943.

Architecturally, many of the houses were based on the Ranch form that was pioneered by the great American architect, Frank Lloyd Wright. True ranch-style homes first made their appearance in the 1920s. Other designs include modern minimalist ideals fostered in the 1930's and pyramidal (foursquare) and colonial box-house forms.That led to a boom in the building of these homes from the 1940s through the 1970s. Their livability, flexibility in floor plans and uncomplicated design were perfect for the post-World War II growth of American suburbs.uy an income source. With multi-family housing, you can live in one apartment while the other side earns income that you can put into your mortgage.